As long as you don't look at the back... 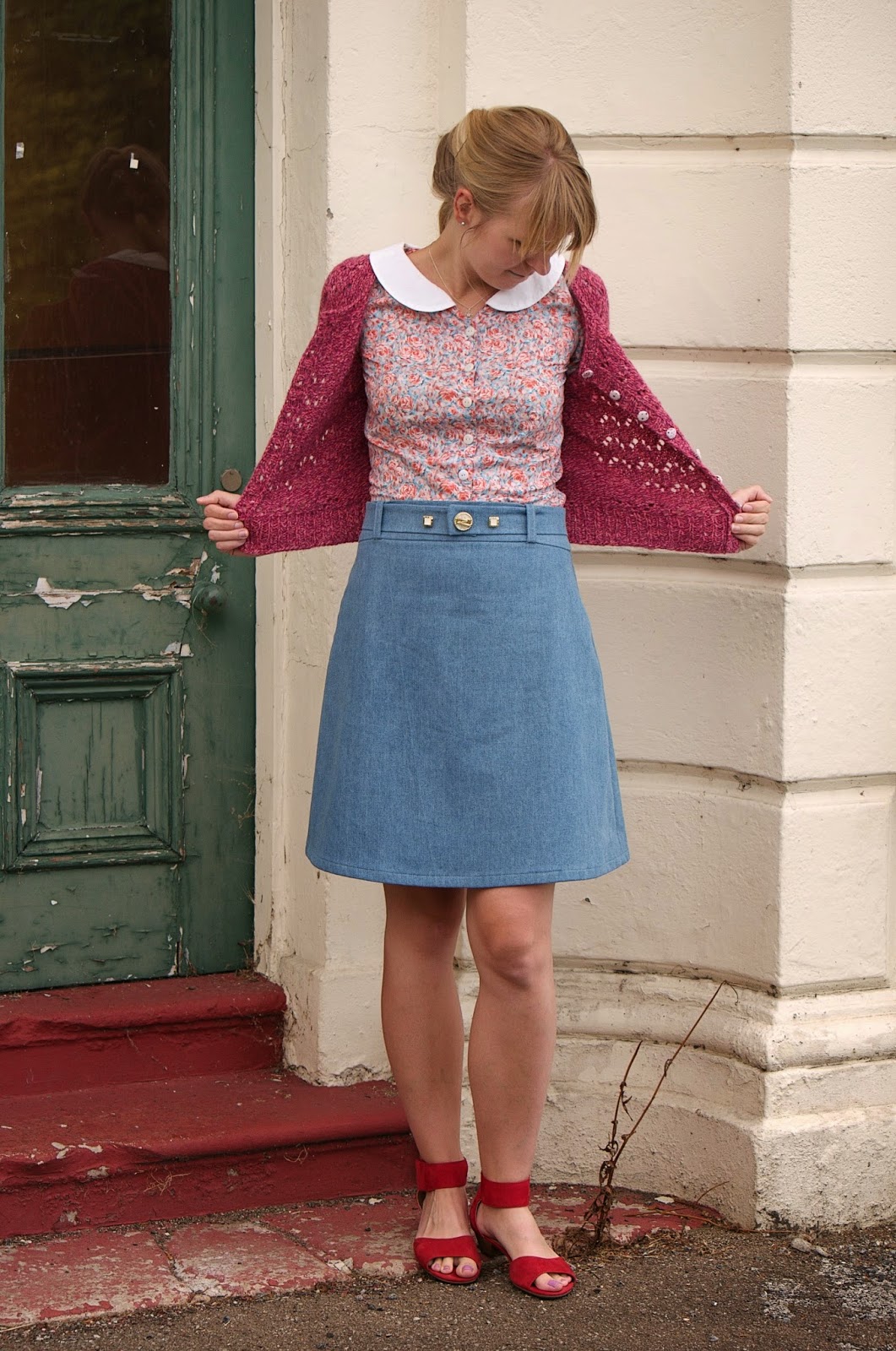 One thing I was really missing in my wardrobe was a denim skirt. I have so many patterned blouses and tops (and skirts), but nothing to combine them with. Nope, I don't wear trousers. Never. So, when Tilly released her book I was immediately taken with the Delphine skirt, which although simple, looked elegant and playful at the same time. 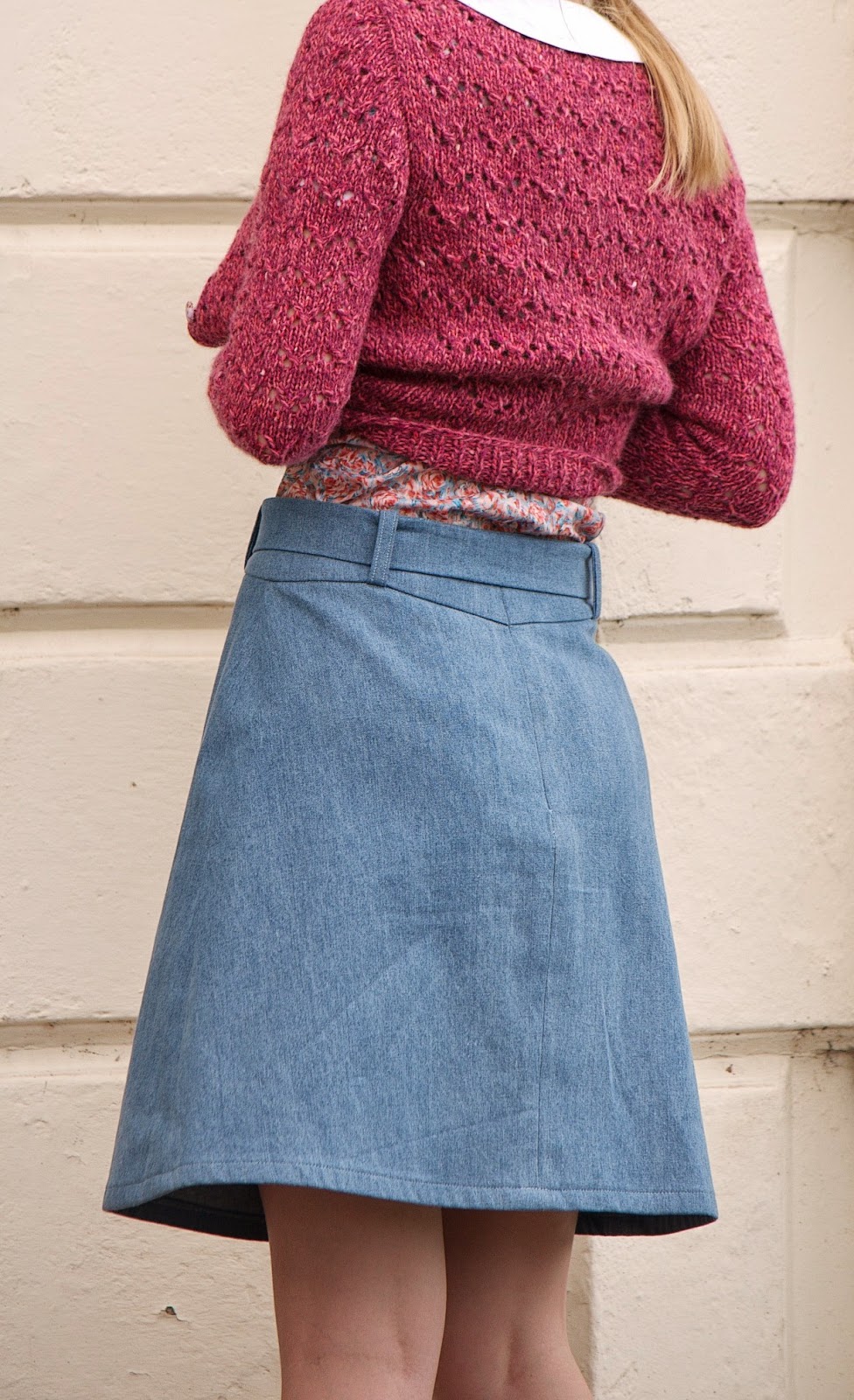 The skirt I'm showing you today is not the first version I made. I made a wearable muslin before (which turned out great), but didn't had the time to take pictures yet. But no worries, you will see it soon because I love it. 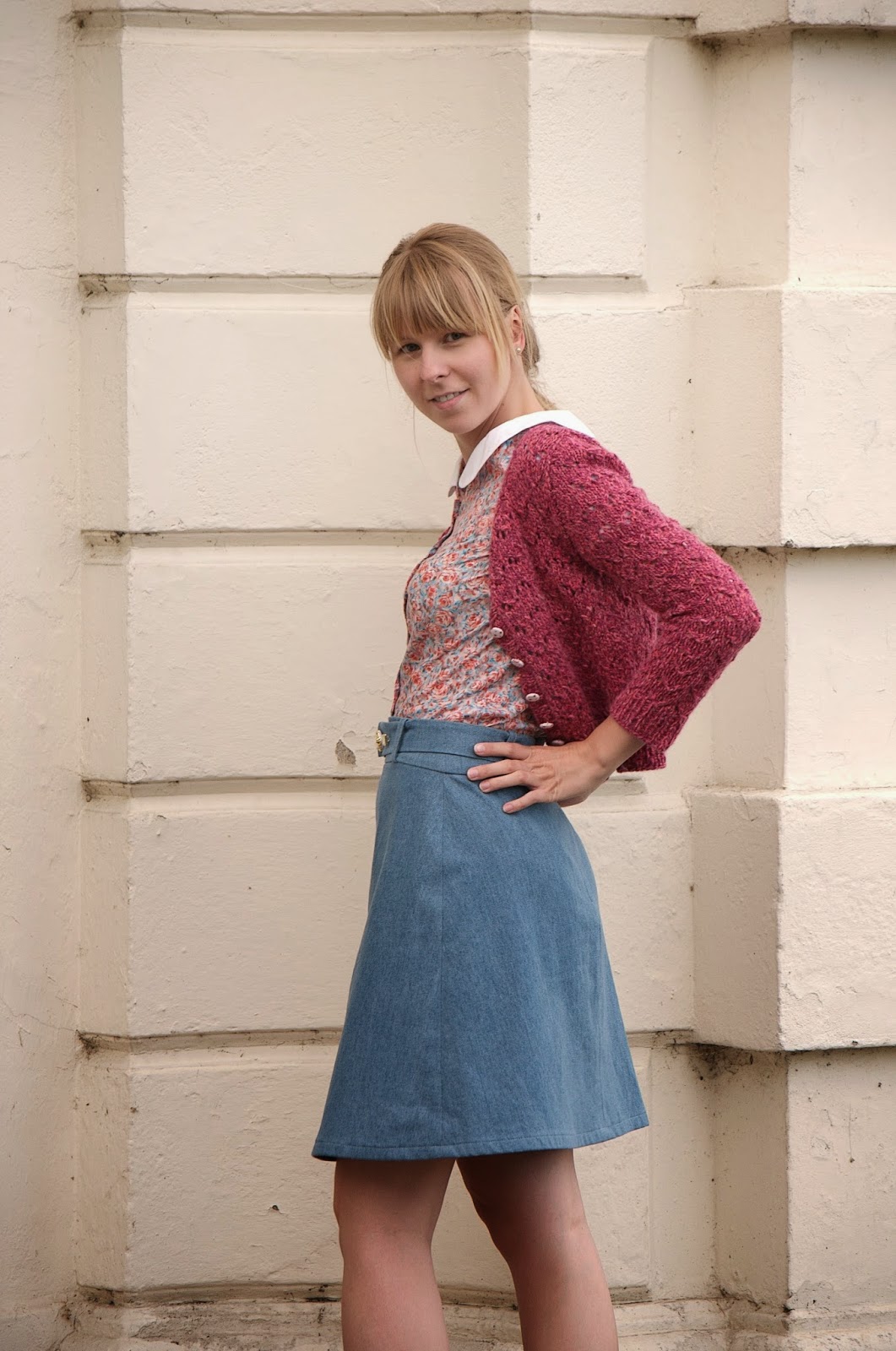 Fabric: Light blue denim that I bought especially for this skirt. It took me three trips to Goldhawk Road before I finally decided to buy it. I had fallen in love with the fabric at first sight, but the price of 8£/meter made me hesitant. But then I just couldn't resist and bought 1 meter :) By the way, is it normal that denim smells like chlorine? Even after washing? 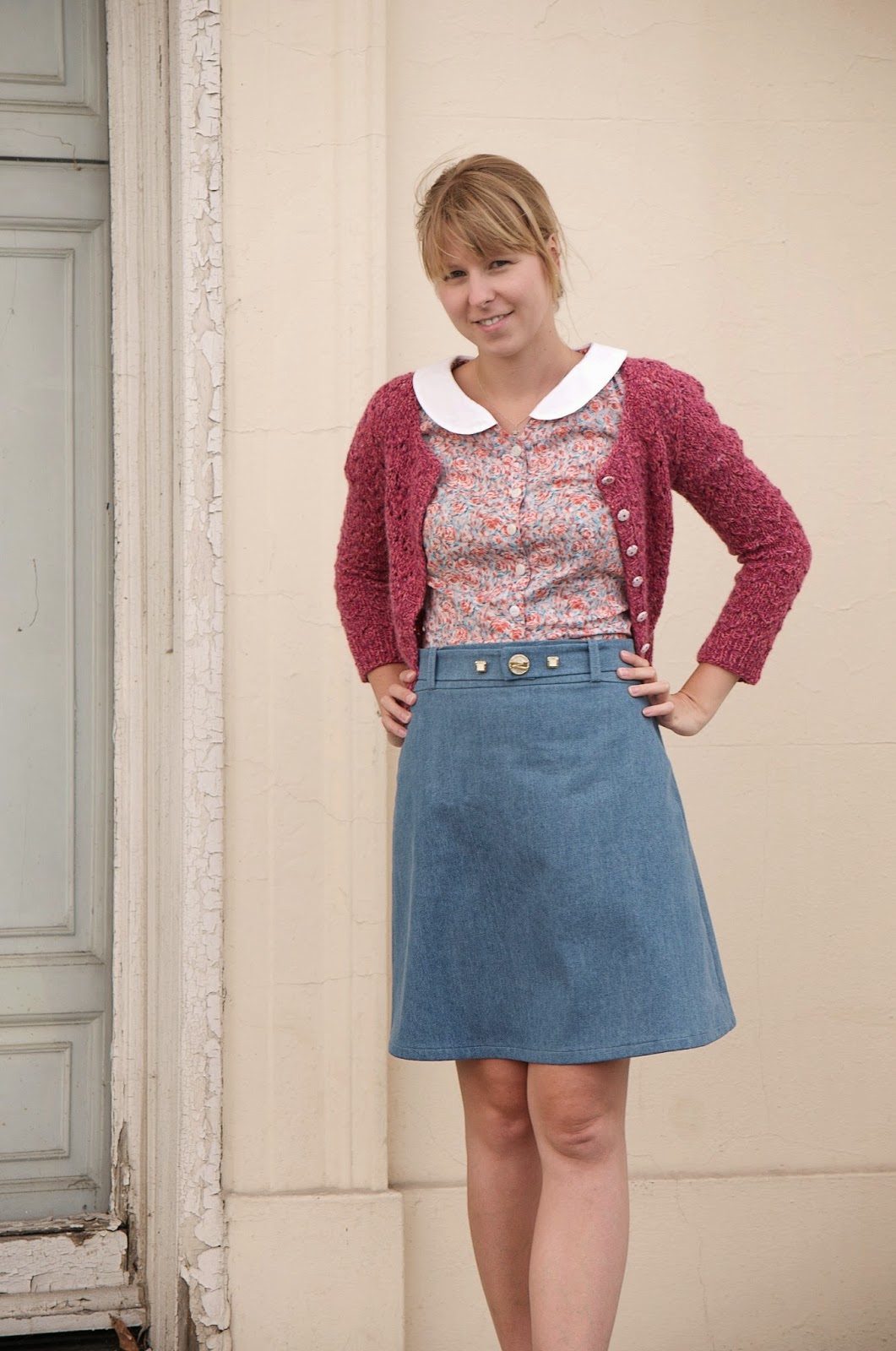 Pattern: Tilly and the buttons Delphine Skirt. I cut a straight size 3 according to my waist measurement. 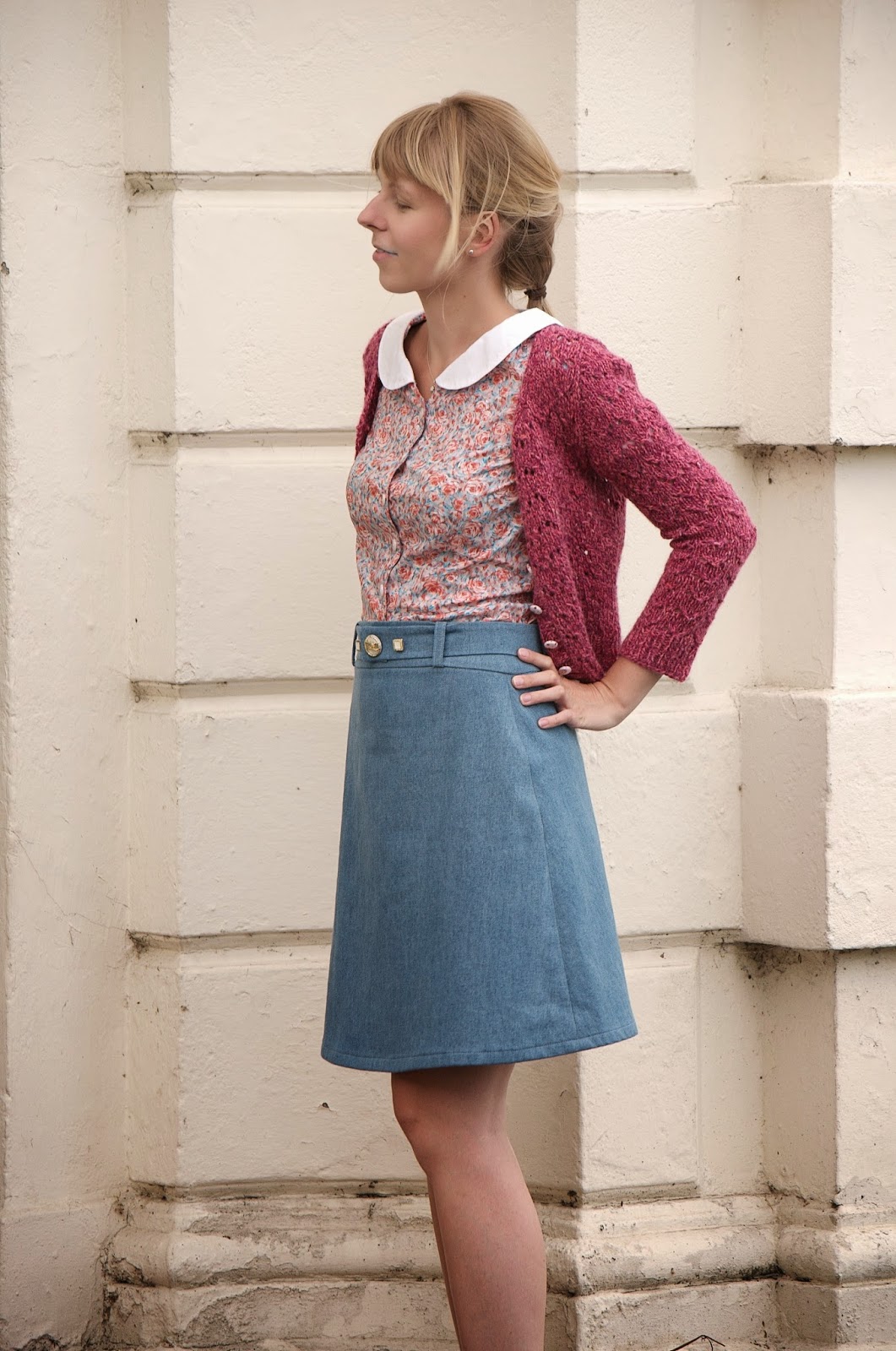 Adjustment: I took the waistband side seams in by 1/4" at the top tapering to nothing towards the bottom. I made a massive swayback adjustment by taking out 2" at the center back of the skirt panel tapering to nothing towards the side seam. However, that's what I'm not fully happy with. Because I took out so much, the waistband looks pointy at the center back. Probably, I have to take out some of the fabric from the waistband as well. But this would mean the waistband will get smaller. I haven't decided yet what best to do. So if you have any suggestions, please comment :) 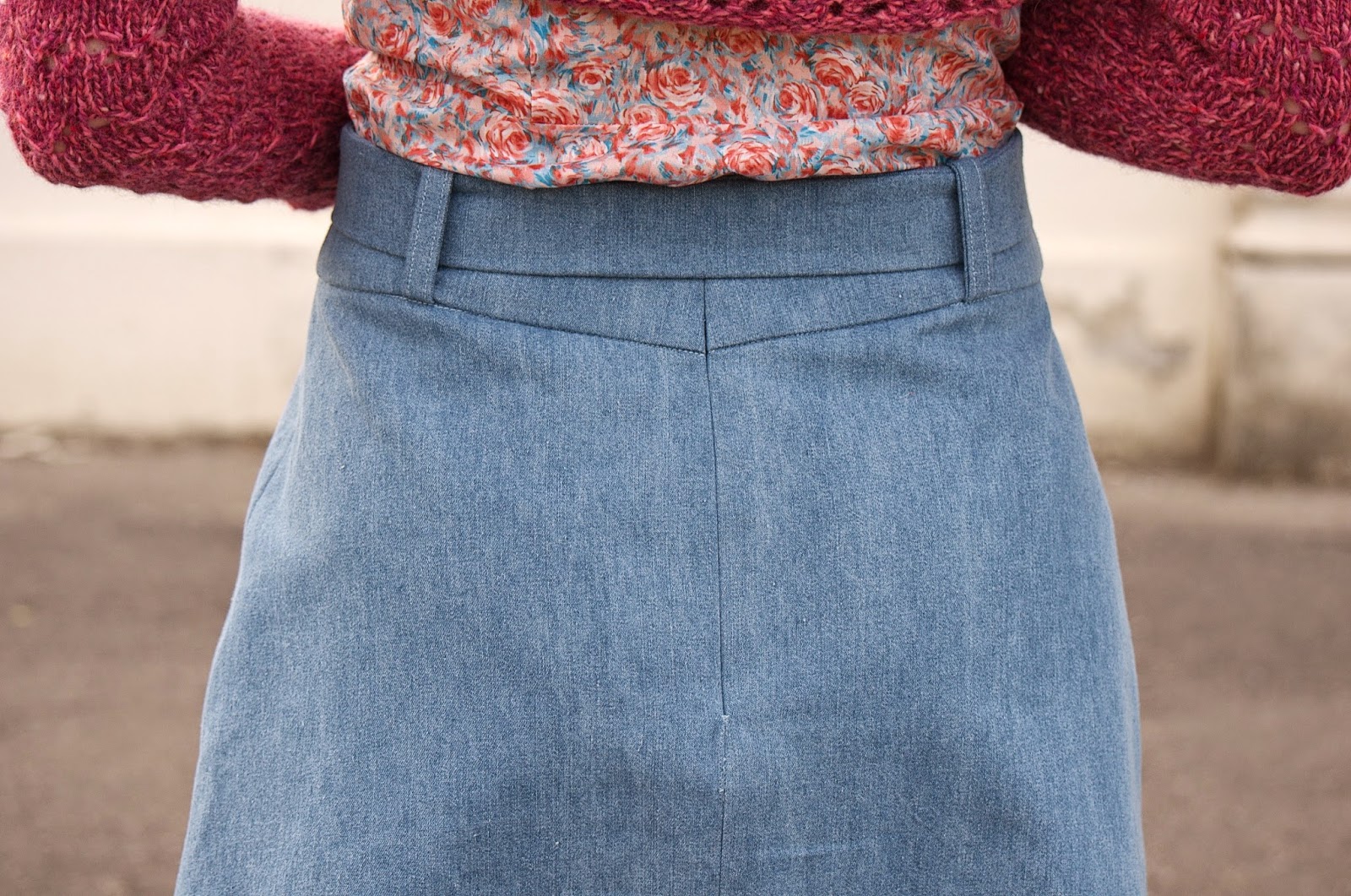 Construction:  Thanks to Tilly's amazing instructions, no problem at all. Tilly suggested to use a contrast facing, which I did. I used some liberty cotton lawn that I had left from the Hawthorn blouse that I'm wearing with the skirt. 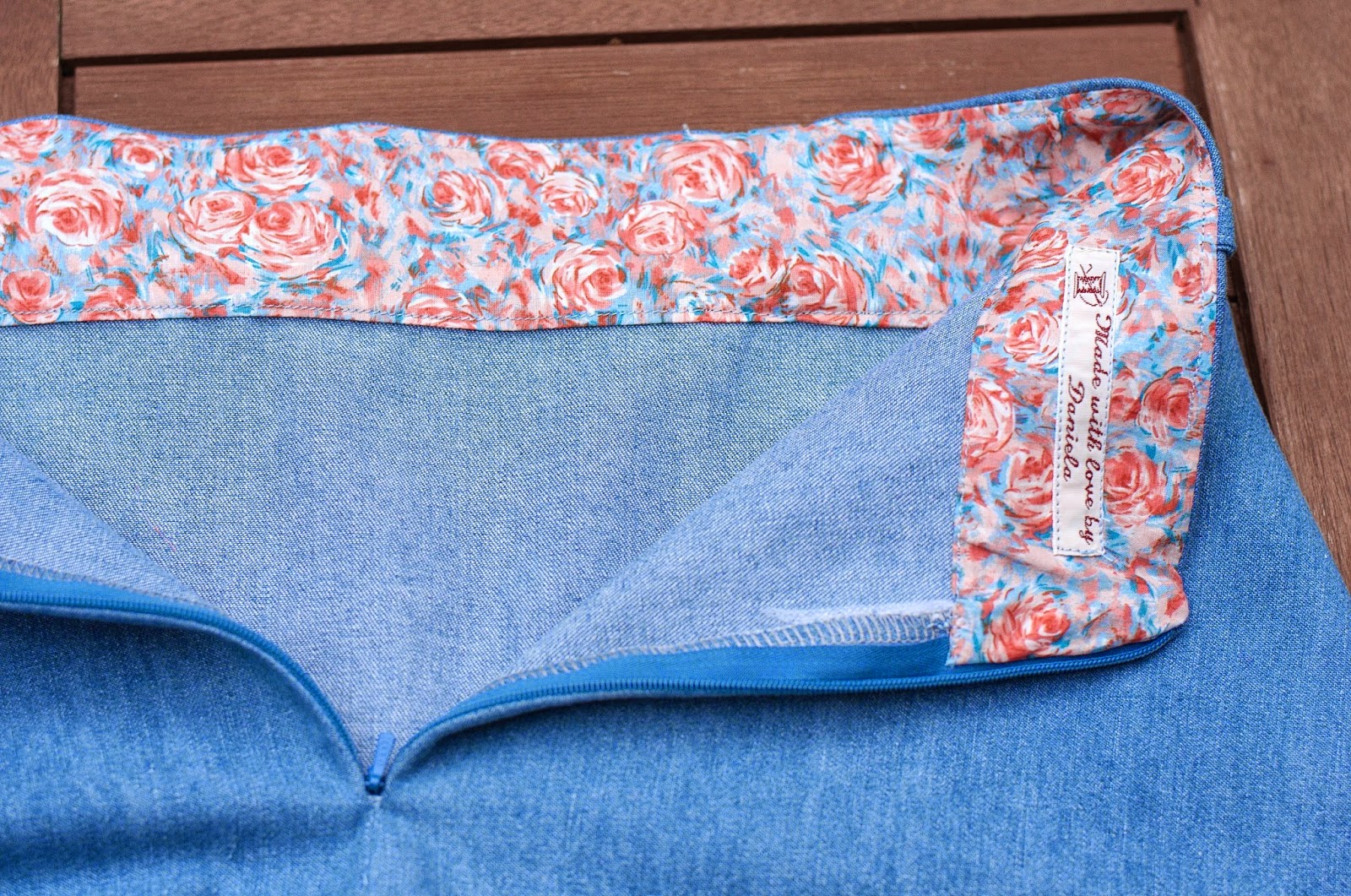 Embellishments: As also described in Tilly's book, I added some belt loops and made a belt. But instead of adding a bow I added three buttons. I didn't plan to use these buttons. Actually I wanted to make the skirt version with the six buttons down the front of the skirt. When I emptied my button jar on the denim to see which buttons I could use, I noticed how perfect the big buttons goes with the denim. And thus the idea of my button belt was born. 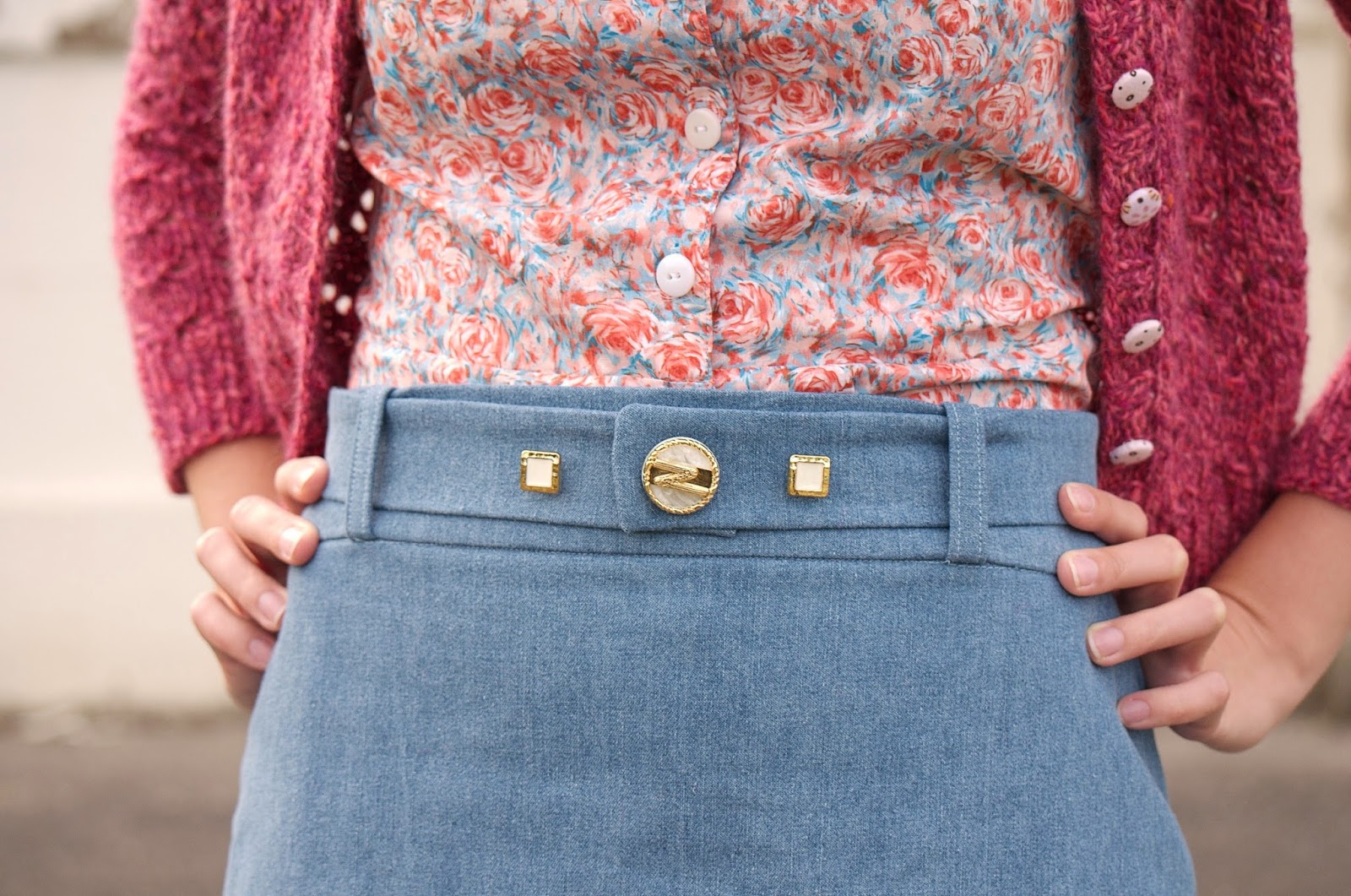 The only issue is that somehow my belt turned out smaller than my waistband and that's why the belt is pulling the skirt up at the belt loops. Because of this the waitsband looks even more crooked. I also noticed on the photos that the hem in the back looks shorter than in the front, buh. I didn't realise it when looking in the mirror before hemming the skirt. I actually made Lescha measure the distance between hem and floor and he confirmed that the back is 1.5 cm shorter than the front. I'm contemplating to shorten the front to make the hem even. Hm, but I'm not in the mood to unpick the hem at the moment. Let's see... 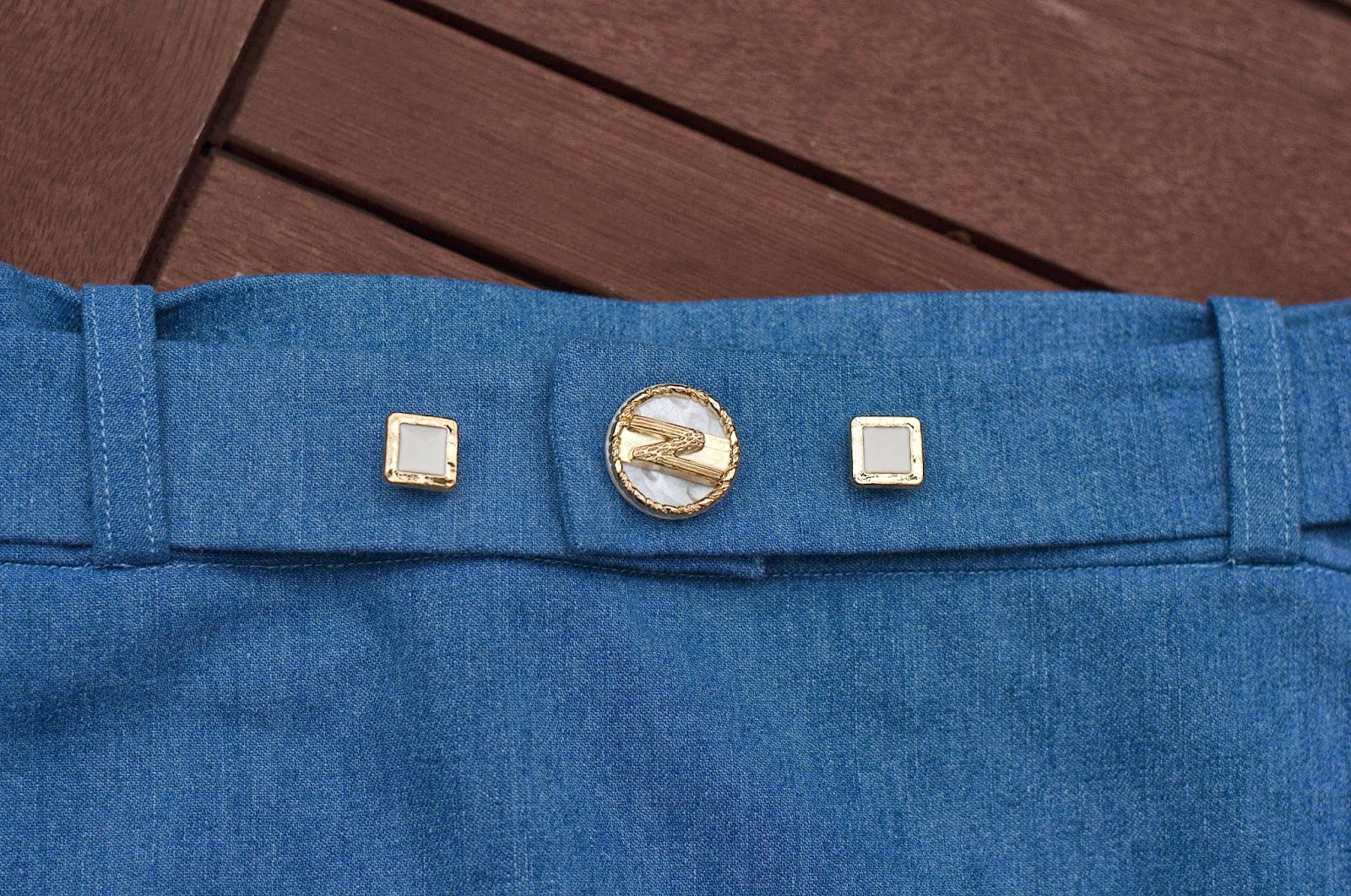 Do I like it? Despite it's little mistakes, I love the skirt. I have worn it twice already and it held up well when I was out all day flat hunting.

In other news, I finally got a flat and will be packing my sewing room in the next couple of days. In the new flat, I will not be having a sewing room, but a little corner in the living room. I'm actually looking forward to sewing in the living room as I always felt a bit isolated from Lescha when sewing in my room. 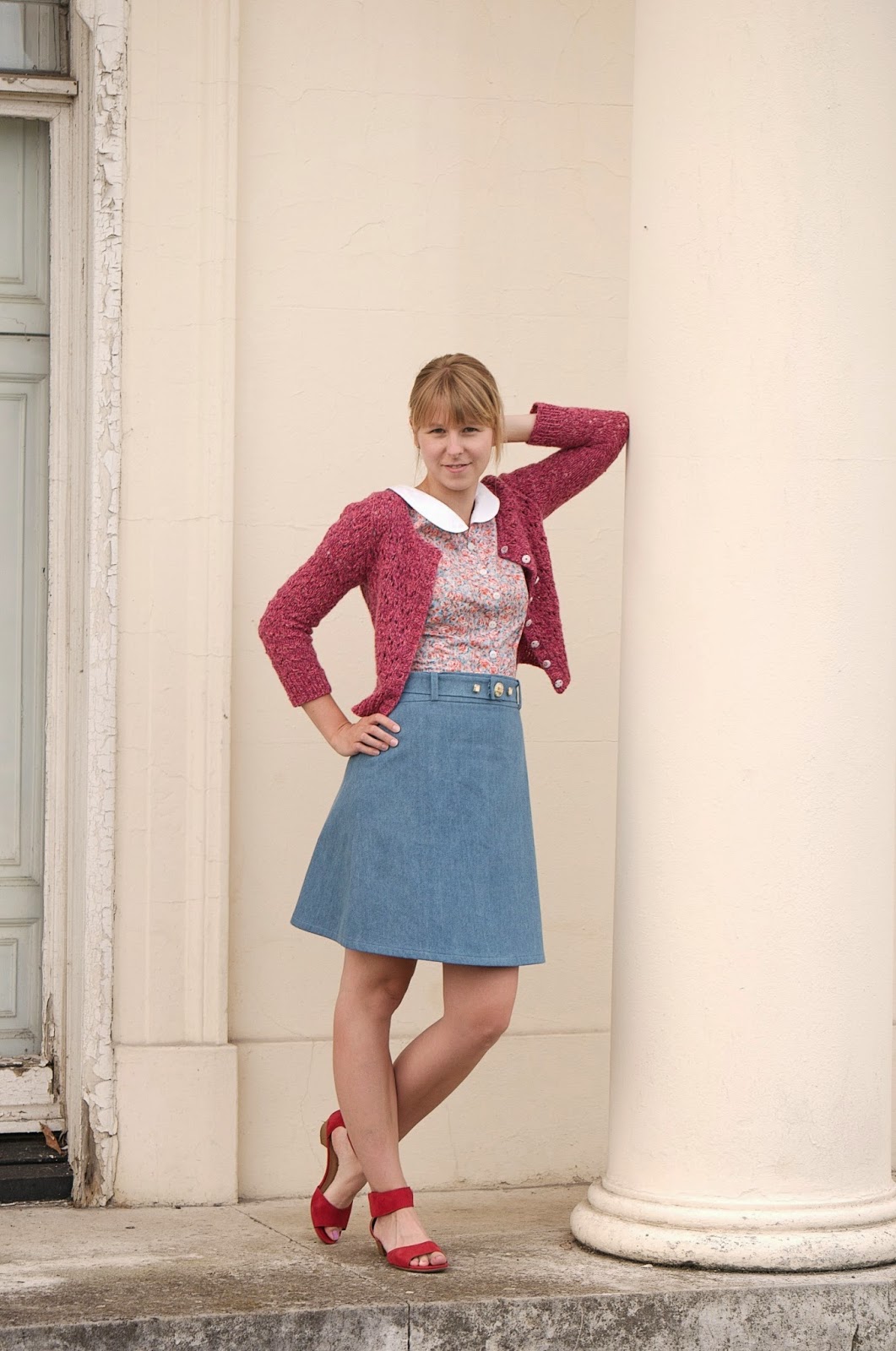 Email ThisBlogThis!Share to TwitterShare to FacebookShare to Pinterest
Labels: skirt, Tilly and the Buttons