May I introduce: my finished Hawthorn Shirt Dress! 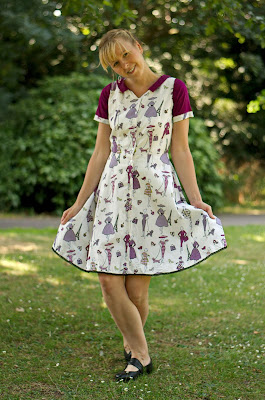 I am so happy with how it turned out. And, I am proud that I sewed a garment that was labelled "intermediate", yeah!

What I like: The contrast between the dress bodice and the purple sleeves and collar. I was at first not sure about this combination because I thought it would look like a waitress uniform. But now, I think it looks almost as if I am wearing a blouse under the dress - that was actually the effect I wanted :) I couldn't resist to stitch black lace trim on the hem (pic further down). Since I took up sewing I am always so tempted to add lace trim everywhere! The next garment will be without, promised!


The buttons I had in my stash and they were actually the only ones where I had enough from, so not really a choice here. They are a bit boring, but because of that go well with the busy fabric print.

I finished all seams with an overcasting stitch of my sewing machine after having trimmed them down. They are all pressed towards the back. So, I did not follow the pattern instructions here who say to press the seams open, because I was told that open seams don't stay open after washing and you have to press them open every time. I don't like ironing that much... By the way, do I have to press darts every time after having washed the garment?

I couldn't be bothered to hand stitch the hem this time and my sewing machine actually came with a blind hem foot. So, time to try out something new! My stitches are not really blind - I can see some bigger ones on the outside and I also missed a few when trying to make my stitches smaller. I think I have to practise a lot more before I am able to stitch real blind stitches with that foot, but it is a beginning and much faster than hand stitching.


Pattern instructions: The pattern instructions were easy to follow and I struggled only at one point: the collar. The collar is too short as you can see on the pic. When I noticed it, I got really really disappointed having thought that I made a mistake when adjusting the pattern pieces for my sloping shoulders. But as it turns out - it wasn't me (now I have the song from Shaggy "It wasn't me" in my head, bah). When comparing my pattern and the original one I saw that my alterations were right and also my seam allowances were as described (5/8"). After doing some research on the Colette Flickr group and looking at several photos and posts, I could see that everybody had the same problem. Only some people noticed because they made a muslin with collar before (obviously, I skipped that step). So, I went along with my slightly short collar, which still looks nice - and nobody will notice as long as I don't point on it :) (I am in the habit of doing it. My sis visited me for a few days and she was giving me compliments. And instead of saying thanks and closing my mouth, I said but ... here and here... mistakes. Uh, I have to work on that!)

But my collar fright was not over yet. This collar was the first one I ever made *proud* and although I put the interfaced piece (= upper collar) on top, you can see the seams that connects under and upper collar. But, having had a look into my sewing book (which I should have done before attaching the collar), I read that you can prevent that by understitching the seams to the under collar - I will remember that next time.

What I don't like: When I fitted the pattern, I fitted it a bit too tight over the back :( It is fine as long as I stand straight. but as soon as I bend forward or stretch my arms I am a little bit scared my seams will burst open. Also, you might have noticed the drag lines on my sleeves. The sleeve is not to tight, but I think the sleeve cap has to be moved lower - meaning my bodice shoulder has to be wider by one inch for the sleeves to sit properly (Does that make sense?). I also had to enlarge the armholes about half an inch because they are a bit to small. To do so, I just stitched another seam under the arm and trimmed some fabric off. That helped a lot for feeling more comfy but did not help with the drag lines..


Will I make it again: Yes! I have already started to make the blouse with the peplum. This time I will try to get a better fit for the sleeves and also make the back a bit broader. I am dreaming already about making a nice autumn/winter dress from this pattern. Maybe I could use a light denim and for the collar a floral print :)


Have I worn it: No, because we are having a heat wave in the UK and the cotton that I used is far to thick to be comfy for this weather. But as soon as it cools down, I will definitively wear it.