In case you are wondering how I can write a review about an overlocker that I am supposed to get on Christmas let me tell you: since yesterday I am the proud owner of the Bernina 800DL! My lovely boyfriend gave it to me (which means I chose it of course) for a special occasion. 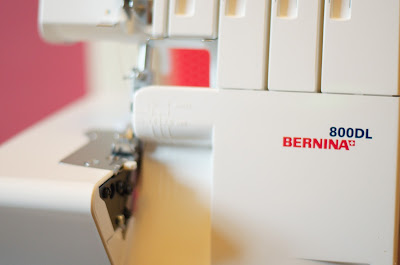 I have been doing some research about the best overlocker brand during the last couple of weeks. As it seams the babylocks are the best and coincidentally that was the brand I serged with when doing my fitting and sewing class. So I was already prejudiced :P

Having a look at the price tags of the babylocks, I quickly understood they didn't fit Santa's budget. After reading loads of posts and many reviews, I finally settled on either the Brother 1034D or the Bernina 800DL. Both are beginner machines but with a big price difference. The only advantage (I could see) of the Bernina compared to the Brother was, that it has many metal parts and hence is not that noisy and should be more durable. 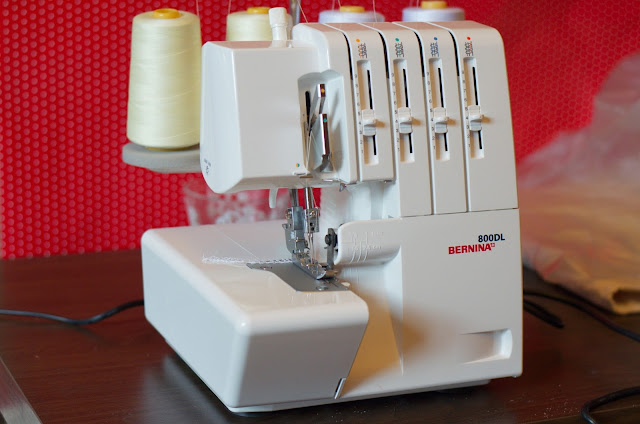 I slightly tended towards buying the Bernina 800DL and had already chosen a website where to buy it. When I was showing it my boyfriend he noticed that the company was based in South London! Perfect, we decided to go there so that I could try out both overlockers, ask questions and then decide which one to buy.


We went yesterday and found ourselves standing in a little shop which is also doing sewing machine repairs. The owner, an elderly gentleman, had loads of knowledge and let me try the Bernina DL800. It was a really smooth ride and I was surprised how quiet she was :) Although the shop sells Brother as well, they didn't have it in stock but I could try a Janome overlocker which was in the same price class. The Bernina won :) and home we went  - me all excited about trying out the overlocker.

I was mostly scared of threading the overlocker, but needn't to worry as she was already threaded! So I just knotted the thread of my cones onto the old thread and then turned the hand wheel until tho knots reached the point where they were to big to pass. That was actually only the case for the two threads that have to go through the needles eyes. Win!

Serging with her is like a breeze and I started already to sew a knit dress. I managed to sew curves after having a look at the great tutorial by Ashley from Make it and Love it. I also tried to serge a rolled hem as this is an inbuilt feature of the Bernina 800DL, but haven't managed it yet. But I am sure I will soon, because when buying a Bernina you are entitled to a sewing machine class at Berninas in London - so I will go soon!

Do you have an overlocker? If yes, what are you use it mainly for? If no, are you thinking about buying one?

You can definitively expect to see more knits from me - I still have my flamingo jersey! I hope you will all have a lovely week! Me veryyyyyyyyy happyyyyyy!
Posted by Unknown at 18:12