Ever tried to sew a men's vest?

I did! I am sure you are wondering "Why has she sewn a men's vest?" and  the reason is that I am living together with one of these male species and wanted to say thank you :) This male species is my boyfriend (as you might have guessed already) and he is always super supportive. He is the one who is pinning my back when fitting a muslin, he tries to cheer me up when I am stuck with fitting and he takes all these lovely pictures from me :) He actually was the one who convinced me to take up dress making again. Not totally unselfish, because he is hoping that at some point -rather sooner than later- I will sew him a fitted shirt. He even convinced me to buy the Craftsy class for a tailored shirt when it was on sale. But at the time being I am neither having the skills nor the intention to sew a shirt. Because men's shirts are kind of boring. You can't add any lace or funky buttons... But enough of that and let me introduce the first (and last?) men's vest I ever made:


Pattern used: Simplicity 2346 which is a "Learn to sew" pattern which teaches skills like lining a vest and adding a pocket. My boyfriend chose version B but without the patch pocket. The vest is fully lined and closes with 4 buttons. At the back you can adjust the fit with a waistband and D-rings. 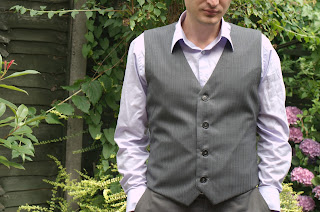 Did I make any alterations? Oh yes! I bought the pattern when I took up sewing in March and thought it will be a nice little project. It shouldn't be difficult to fit the vest because you don't need any bust adjustments :) But, in the end it was not easy at all! It took me two muslins and I had to trace the back twice (luckily I am tracing!). The problem was, that I was not sure what the fitting issue was. Also the vest did not have any darts at the back so I did not know how to shape there. In the end I made a sway back adjustment and I also added tissue at the back at height of the shoulder blades to give more room for my boyfriends round back. The neckline and back armholes were both gaping so I had little choice than to add a dart at the shoulder seams. I also shortened the waist and moved the shoulder seams - both of these task were the easiest ones and the issue fast spotted.

Fabric choices: The fabric is a men's suiting fabric that contains some wool fibers. We bought it in Goldhawk Road where I almost passed out when seeing the prices for suiting fabric - imagine me a beginner and sewing with a fabric that is 16 £/meter. But we were lucky, because after I pointed out, that I am a beginner I was referred to the leftover fabrics which were half the price but you had to buy the full piece. So, I found one that was not overly long and got that (I still have half of it left and no idea what to use it for). For the lining we bought some polyester and the buttons I bought in a little yarn shop that I have discovered in Ealing, London.


Fabric preparations: I have never worked with woolly fabrics, so I was worried how to preshrink it. I found some advice in Claire Shaeffer's Fabric Sewing Guide, who suggested to steam the fabric. So I just filled the bathtub with hot water and left the fabric hanging over the railing for half a day. Believe me it was not niece to go in there, especially because it is quite hot in London at the moment! I then left the fabric to dry and done. I didn't preshrink the polyester in the hope it will not shrink/ the vest will always be clean and there will be no reason to dry clean it :P.

Garment construction: As the pattern is a "learn to sew pattern", it came easily together. You just sew the right sides of fabric and lining together, leaving an opening on both side seams. Then you turn it right side out and press. The pressing took me ages, as I was trying to get a crisp edge so that the lining doesn't show. Then I was afraid I would shrink the wool by accident even when using a pressing cloth.
The instructions tell you to sew the main fabric side seams together and then hand stitch the lining side seams (buh). Here, I must have misread the instructions, because I had sewn the lining together and then hand-stitched the wooly fabric. All the while wondering why you would do it this way around because my stitches are not that perfect and they might show. Just when I started to hand stitch the second side seam I had another look on the instructions and realized my mistake. Hello Mr. Seam ripper! Having corrected that, everything worked out :)

Has my boyfriend worn it yet? No for two reasons: 1st it is a Birthday present and his Birthday is in August and 2nd it is far too hot (not that I am complaining).

Will I make it again? Probably not. I am sure one vest is enough, don't you think? You can't do much variations there except for fabric and buttons. Also, I am quite selfish and prefer to sew garments for myself.
Posted by Unknown at 12:42